Blizzard got you stuck inside?  Ok . . . I’ve just violated my “no yin puns” rule, so that may indicate the madness is setting in.  Winter can be harsh.  Snow removal and cabin fever can wreak some serious havoc on our bodies and minds.  Here in Maine, the entire state is currently shut down, and if you’re not out shoveling or playing in the fluffy white stuff, chances are, you’re staring glassy-eyed at the computer screen. I see no better time than now than to put this sequence to the test.  You won’t regret it!

There are four main principles of Yin Yoga.  First, we come into a shape and go to the first point of resistance, and from that mild “edge” of sensation, observe what is being felt.  The sensation should be no more than a mild, dull ache, and not gravitate toward anything sharp, stabbing, or burning.

The second principle is to remain still.  With the muscles relatively relaxed, the stress will transfer to the denser connective tissues.  Keep in mind, you are not fixed in a single spot for the duration of the pose. Do be sure to change the angle of the pose to accommodate for any release, or to back away from a sensation that becomes too intense.

Third, yin postures are held for longer periods of time.  Postures can be held anywhere from three to even 20 minutes, but start with a time frame that makes sense for you, honoring the foregoing tenets.

Lastly, be sure to release each pose with care.  There will likely be a sense of fragility in the body as tissues respond to the stress.  Move slowly and mindfully as you transition.

Practice postures sequentially as listed, allowing for 3-6 minutes in each pose.  The postures that are suggested to be practiced in a series can be held for less time if needed.  Get creative with how you sequence, and be sure to give yourself at least 1-2 minutes between postures to rest in a prone or supine savasana, observing the effect.  Static, muscular holds, and even some slow, controlled dynamic movements are also appropriate ways to transition.  It is normal to feel some fragility as you exit a posture, and that sensation may stay present for a minute or two.

1) Twisted Deer.  Sit with your feet on the floor, mat width apart.  Let the knees drop to the left and walk the upper body toward the back of the mat.  The legs will be in a pinwheel shape as shown.  Walk the hands away from the body and drop them to the forearms.  This pose internally and externally rotates the legs, creates a gentle twist in the spine and targets the quadratus lumborum (the QL is a spine and hip stabilizer, located in the lower part of the back on either side of the spine) 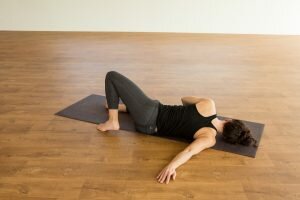 2) Pec Stretch.  Begin in a prone position, and extend the right arm out to the side.  Place the left hand under the shoulder and roll onto the right hip to stress the inner line of the arm and chest.  You can stay with the knees bent any amount or take the left foot behind the body as shown.

3) Seal.  Begin on the forearms in Sphinx pose, and from there, transition to Seal by fully extending the arms, moving the hands toward the body any amount that allows for an appropriate amount of sensation to the lumbar spine.  Hands my turn in or out.


4) and 4(a) Saddle.  Sitting on the hips, or on a block as shown, lean the upper body back, resting the elbows on a bolster to target the front line of the body, and extend the spine.  Taking the pose further back will work for some bodies, either with a prop (as shown in 14a) or without a prop.  Play with taking the thighs wider, and be sure to avoid this pose if any pain is felt in the knees. 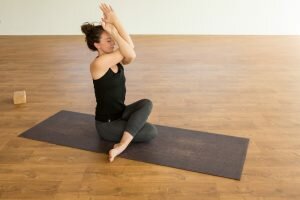 5) Shoelace with Eagle Arms.  Wrap your left leg on top of the left as shown, or cross the shins if there is discomfort in the hips and/or knees. Sit on a blanket or block if needed. Wrap the right arm on top of the left and elevate the elbows, keeping the posture tall and steady for a minute or so. Allow the mind the scan the body and breath. 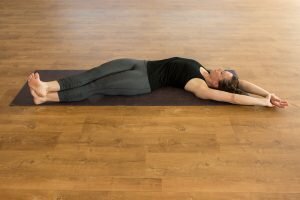 6) Banana.  Turn yourself into a banana to stimulate the side body. Start by bending your knees and moving your hips to the right. Extend the legs and move the heels to the left, crossing one ankle over the other. Try both and see which you prefer. Reach the arms overhead and shimmy the upper body over to the left and hold your right wrist with your left hand. Incline the head to whichever direction feels natural. Repeat on the other side.